With this year’s awards season well behind us, I can’t help but wonder how many of the films touted as the year’s best will last into the distant future. I personally loved Whiplash, but I can’t guarantee that I’ll still appreciate it at the end of 2015, let alone at the end of the decade.

Consider how quickly a multi-award winning film like 2011’s The Artist left the public consciousness, or how certain films from the Academy Awards’ history don’t even physically exist anymore, and the mutability of our cultural narrative is made uncomfortably apparent. Our appreciation of modern art is built on the mores of our time – an unsteady platform that could collapse at any moment.

It’s often suggested that ‘Art’ with a capital ‘A’ only manifests after a long period of reflection. This handily explains why so many great artists have gone unpaid during their lifetimes, or in more recent years, why a film like The Shawshank Redemption can go unnoticed on release, but go on to be ranked by the public as the greatest film ever made on a website as wide-reaching as the IMDB. For both better and worse, the passage of time can have a profound effect on both art, and those who create it.

To see this effect in action, we need look no further than the legacy of The Beatles. 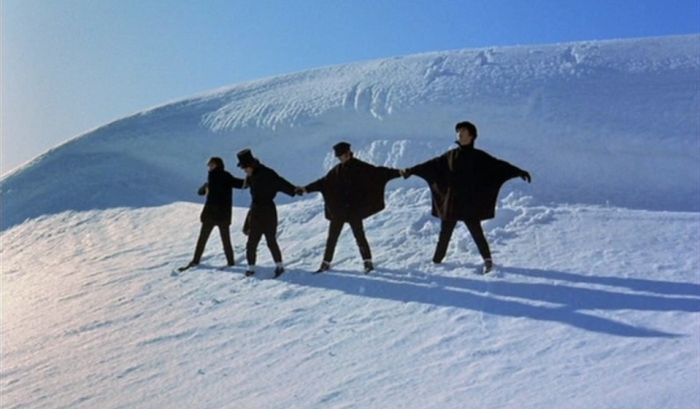 When the news that Kanye West was collaborating with The Beatles’ Paul McCartney made the rounds earlier this year, online discussion quickly escalated into a small-scale generational skirmish. As is often the case on the internet, the joke—or perhaps reality—that Kanye West fans didn’t know who the former Beatle was, quickly became a point of argument and ridicule.

One tweet addressed McCartney as an ‘unknown artist’, who should be indebted to West for bringing him to international attention, and quickly became the catalyst for the sort of storm-in-a-teacup furore that only the internet can provide. Nonetheless, it did provide a revelation that will likely meet a greater response in years to come: that is, The Beatles are dead. Not literally, of course—or at least, not all of them—but the idea of The Beatles as a cultural force has been supplanted; as has the idea that any one group or entity could ever hold so much sway over the public’s way of thinking.

At some point in the last 50 years, The Beatles lost their home on the cultural radar, replaced by a music industry and a culture that’s significantly less willing to worship a single entity as a lone force for change. It’s an issue that fans of The Beatles who followed the Kanye situation no doubt echoed in a much less favourable light: but the days of The Beatles, The Stones, and The Who are long gone, and are unlikely to return, regardless of how many Harry Styles masks get sold in ASDA in the years to come.

Fittingly, I watched one of the Beatles’ commercial vehicles, Help!, recently. Released in 1965 at the height of ‘Beatlemania’, Help! is madcap comedy film indebted to the ‘new wave’ of anarchic British slapstick of the time, one that, from a modern perspective, is strangely both troubling and uplifting.

If basic mathematics didn’t already do the job, I think it’s worth stating that 1965 was a long time ago. Cultural attitudes have changed in the wake of The Beatles’ disbandment, particularly with regards to Britain’s lingering imperial history, and perhaps this is why, with its aesthetic fixation on (and fetishisation of) Indian customs and tradition, Help! should feel so irrelevant.

Akin to most sketch-based British comedies of the era, the film begins in media res with little explanation needed. The viewer is quickly made aware that Ringo Starr (another ‘unknown artist’; previously The Beatles’ drummer) has inadvertently stolen a mystical ring belonging to an Asian cult, forcing The Beatles go on an extended holiday across the world in an attempt to escape foreign retribution. Along the way, two British scientists intervene, and the three interests collide over the ring’s material wealth, in a very thinly veiled (and arguably intentionally light) commentary on Britain’s post-war cultural landscape, and the rising wave of adventure cinema signaled by Eon Productions’ James Bond series.

Without the cult of personality that surrounded the group to colour modern interpretations, Help! struggles to provide laughs. Comedic beats are frequently hit too early, if not missed altogether, and there’s an overriding sense, with its sporadic hopping from place to place, that the film was an excuse for everyone involved to vacation.

A scene in The Alps, for example, touches on a number of evil schemes and hazards coming The Beatles’ way, amongst which is the reveal that a dim-witted antagonist is primed to dive under a sheet of ice at a moment’s notice. When the time comes, however, the lackey, and any potential punchline he may have offered, is forgotten, lazily sidelined in favour of a man falling over for the tenth time. There are too many botched set-ups and misdirections, and it leaves the film as a whole feeling disjointed and inconsequential. Help! is a film with very clear influences, yet no idea of how to act on them.

It goes without saying that The Beatles were never commended for their comedy skills. The film’s value is clearly supposed to come from the interplay between the band’s public persona and its on-screen equivalent. John Lennon is a hard-nosed leader, Ringo Starr is a dim-witted buffoon…, it’s clear that these jokes were playing up to a public conversation that is, to the film’s detriment, now long-gone.

There are a few highlights: the group’s home, for example, a batcave-like townhouse, is a great piece of visual design and comedy, one that holds up if just for its absurdity, while the film’s numerous musical interludes benefit from its globe-hopping scope, providing some nice photography to back up the group’s time-proven hits. These ultimately do little to endear the unknowing viewer to the film’s comedic fixations, however.

Most egregiously, Help! often relies on the give-and-take of comedic stereotyping between East and West, and in 1960’s Britain, the balance between ‘give’ and ‘take’ was perhaps a little skewed. The worst criticism it seems to offer for the British is that their electric appliances are sub-par: a far-cry from the sacrifice-hungry, dim-witted Asian stereotypes on the other end of the stick.

Of course, it’s futile to berate a film too much for its age. Some might argue that there’s little left of value in a film like Help!, let alone in reviewing it. For me, though, there’s something cathartic in realising that the pop accessibility of The Beatles now dwindles; leaving their work ready for reappraisal.

For the longest time, the dominant cultural narrative has revolved around a few select entities, of which The Beatles are amongst the most prominent. I think it’s only in revisiting films like Help! that we can reassess this narrative, to re-figure our tastes and desires, and draw a less populist and more nuanced path through our cultural history: beyond a straight line from A to B; McCartney to Kanye.

Help! is a once-endearing, but undoubtedly naive exercise in comedy filmmaking, one that was wholly elevated by the unique—and often troubling—culture of late-60’s Britain. Under its lens, I’m almost made happy that Kanye West fans can shrug off Paul McCartney, if just because it signals change and progress, towards a more complicated view of who we are and where we’re coming from. There’s nothing wrong with The Beatles, of course—just like there’s nothing wrong with a film like The Artist—but Help! handily confirms that everything has its time in the sun.