Regular readers might be aware of my recent foray into the muddy waters of the VHS tape. Through equal measures curiosity and lunacy, the Snacked Up household has begun to sift through a backlog of more than twenty years of cassettes, whether marked or mysterious; bootlegged or bootstrapped.

Through the medium of grubby old videos, I’ve been introduced to long-forgotten bands, god-awful variety shows, and more boobies than you can shake a sexual organ at. They say that time mends all wounds, and nowhere is this truer than here; where even the greatest flops of the nineties can find redemption as relics of the past. It’s only unfortunate that, behind the whir and click of nostalgia, I’ve also been introduced to the death throes of a medium unfit to last.

After twenty years sitting dormant, VHS’ trademark low-fi crackle and fuzz is now out in full force. Slowly but surely, a growing mask of white noise is spreading across every tape in my house, threatening my ability to laugh at recently-outed sex offenders in old BBC variety shows. It’s tragic.

Ever since the audio started warping to demonic proportions on my childhood copy of The Brave Little Toaster, I’ve been aware of VHS’ underlying frailty – but now it’s hard to ignore. Today’s movie – Salvation! Have You Said Your Prayers Today? – was imprisoned in a dank cupboard at some point in the early nineties, and emerged this month more mold than movie. As a result, it’s probably worth noting that my following judgements are made having watched it through a sheet of fuzz, with a perpetual buzzing grinding down into my ears. It didn’t stand a chance. 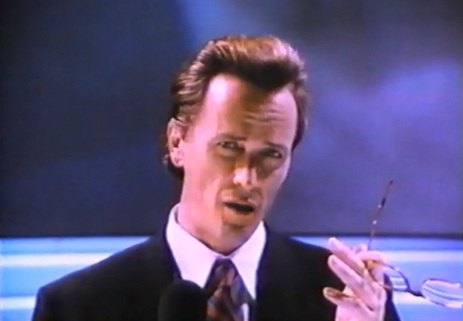 At its roots, Salvation! is a well-meaning satire of televangelism, filled to the brim with sex, sleaze and twanky parties. Whatever those are.

The film is split into three acts, signposted by self-indulgent title cards that veil some fairly egregious shifts in tone. To cut it down: crooked televangelist Reverend Edward Randall (played by the oft-underrated Stephen McHattie, of Pontypool) is dragged into a life of vice by the primo god-hatin’, knuckle-polishin’ man’s man – Viggo Mortensen.

A frothing ball of working class anxiety, Viggo’s character uses his wife and sister-in-law to exploit the Reverend, and cash in on the evils of false preaching – all while utilising as little logic as possible. Along the way, people shout a lot, a pint-sized devil runs really fast to the tune of Christian rock, and the editor gets so fixated on the humdrum minutiae of the characters’ lives I can’t help but wonder if I’ve missed some sort of postmodern statement. 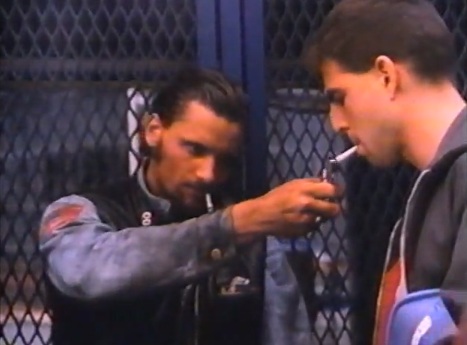 One of my main concerns is that very little actually happens in this film – and when something does, it’s often hard to explain. The characters wobble between conflicting stances with the frequency of a slinky on a tire-swing, and pacing and causality are thrown to the wind. When things decide to happen, they just do, with little explanation or motivation on behalf of the film’s wafer-thin characters.

Not to mention, there are moments that are just laughably dumb. Early on in the film, Viggo’s character – the de facto fourth Stooge – attempts to imprison the Reverend in his own home. Within the space of five minutes, the Reverend manages to escape through the same open window twice. Yeesh.

And it’s not all laughs either. The film regularly spills into the banal as we’re forced to watch people count money and play cards to no end, if just because flashing the word ‘CORRUPTION’ across the screen would defy the medium. As the film progresses, the plot is sidelined in favour of heavy-handed sermonising, before being kicked out of the movie altogether to make way for a closing spoof rock number. Quite simply, Salvation! is a film at odds with itself. 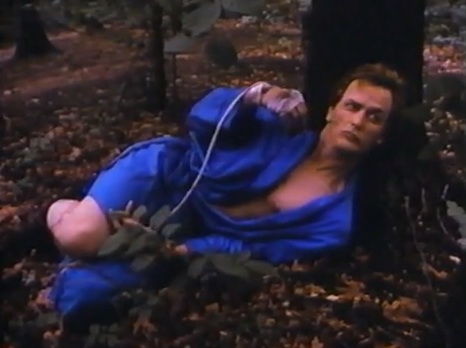 Pictured: me, shortly after watching this film

Even conceptually, something feels off. I can level many of the same criticisms against Salvation! as I did against Bobcat Goldthwait’s God Bless America last year: this film is the cinematic equivalent of shooting fish in a barrel.

Televangelism has been the target of aggression and parody since 1972’s Marjoe – and while Salvation! may have ‘prefigured pop culture’s fascination with televangelism’, it said little that wasn’t going to be made painfully obvious in the years to follow. Being the young whippersnapper that I am, I’m not going to speak on behalf of the film’s reception as-was, but I’m confident enough in saying that this film offers very little to a new audience in 2013. The ‘nudge-nudge, wink-wink’ school of filmmaking is out in force here – the preacher is crooked, don’t you know – and serves only to hit you over the head with ideas better explored both before and since.

If anywhere, Salvation! finds redemption in its soundtrack: advertised on the front of the box, the back of the box, the IMDB page, and most reviews I can track down online. Akin to Tapeheads and High Fidelity, this is a film that, while not expressly about music, is fundamentally musical, and that answers for some of its misgivings.

Director Beth B operates under no pretence – from minute one, when New Order’s Skullcrusher is layered over the pump and strike of machinery; it’s clear that the soundtrack is everything: this film is the auteur’s answer to MTV. Insular vignettes take shape almost like music videos – particularly a surreal sex scene in the second act, in which the film’s neon set design proves itself as visually striking as ever, even when obscured by layers of fuzz. It’s a small grace for a film that otherwise has little to recommend.

Ultimately, from behind the veil of moldy old tapes and post-millennial life, it’s near-impossible to consider Beth B’s work as intended, and with nary a DVD release in sight, and little in the way of online discussion, it seems that things might remain that way indefinitely. Though Salvation! may have offered its audience something worthwhile in 1987, its appeal seems to have died with the VHS; the concepts within left moldy after twenty years out of sight.

One thought on “Review: Salvation! Have You Said Your Prayers Today?”